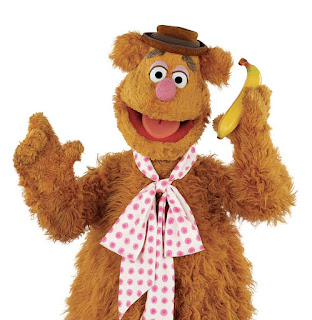 In March I had set a new personal best of 1:34 at a fantastic half marathon in Comox, while raising money for Canucks Place Children's Hospice.

A couple of weeks later I won - can you believe it?! - the Prince Rupert Half Marathon.

I returned to Rupert in September to win - this time I did believe it and had every intention of doing it - the Cannery 10km in 40 minutes!

A few weeks later I would have the best race of my life at the Victoria Half Marathon, setting a new best of 1:30! All with another successful charity campaign for BC Children's hospital

Yeah, it was a great year. But do you know what my two most memorable moments were that year?

It was shortly after the win at the Rupert Half that I got repeated messages from this persistent guy on Facebook. He started by saying "I want to run with you." I remember thinking what kind of Cracker Jack is this guy? And though I ran with my friends Richard and Derek, I was mostly a solitary runner still. But for some reason I agreed to go for one run with this guy.

His name was Brent Webb. It's still his name, actually. He turned out to be a pretty good runner, and even better person. And he likes orange, too.

So that initial contact sticks out as a great memory. We quickly got to training together, both learning the value of having a like-minded training partner of about the same pace. We talked endlessly about running, and hockey, and how it turns out he grew up on Soucie street right beside my grandma's house where I spent a lot of time as a kid. Who knew? He also had to endure my long list of Fozzie Bear jokes. Wocka Wocka!!

Brent is a marathoner, far from my specialty. He had a big goal of qualifying for Boston. He had missed a couple of times previously. Not by much mind you, but enough to frustrate him. You could see he wanted it badly, and I wanted to see him do it.

Remember earlier when I told you about that day in Victoria that I had my greatest race, finishing the half marathon in 1:30? Yeah it was great, but it was actually my second favorite moment of that particular day. 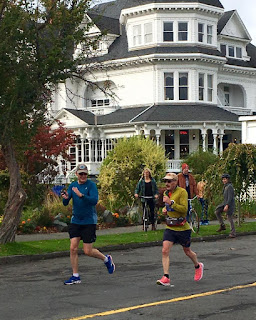 After my race I was able to go back to my hotel near the finish line, shower up, eat some lunch, and read the hockey news on my phone. Then I headed back up on the course to meet Brent. I had been following the online tracker and knew he was in excellent shape, but I wanted to be there to run him in. I'm still not certain that I was actually allowed to go back on the course, but I did run him in for the final 3 or 4 kilometers before I ducked back into the crowd ahead of the finish line. I was able to see the end of the story. Brent had qualified for the 2018 Boston Marathon with lots of time to spare.

That summer both of us learned the value of training partners and learning from and supporting others. To see someone achieve their goals is truly inspiring, and to help them on their journey is the greatest reward. It inspired us to bring back Skeena Valley Runners, and continues to be the driving force with each step we take.

Brent runs his Boston Marathon in just a few days, on April 16th. Be sure to wish him well.

Yes, 2016 was a great year for my running. Too bad it would all come to a crashing halt just a few months later....