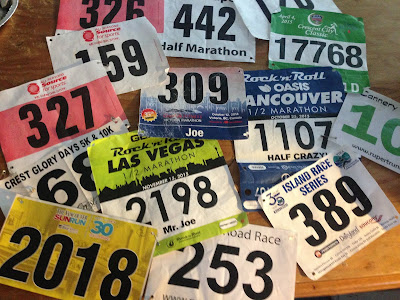 Charmaine's favorite part of my running is the destination race.

Whenever we travel - and we like to travel - she tries to find a race. Seriously. It's her idea more than mine. Usually.

It actually started with my idea of running down the Las Vegas Strip. I hate Vegas. Charmaine loves it. But running down Las Vegas Boulevard was too good to pass up. They actually shut down the entire Strip at night time and runners race down it, with all the glittering lights and thousands and thousands of drunk spectators. The race is heavily sponsored by beer companies. I left the finisher chute carrying out like five beers. I don't even drink!

It was such a great time, despite wet and windy weather. I did a successful fundraising campaign for the Michael J. Fox Foundation on that one. It's been a little while, but being "the charity runner" allowed me to give more value to my running.

After Vegas we did New Orleans. How can you pass up starting at the Superdome, running through the famed French Quarter, along the mighty Mississippi and through the mighty oak tree framed Esplanade Street?

That was a funny run. 10k Cresent City Classic. I actually had an injury in training derail my time goals, but I had an audacious goal of being the fastest Canadian in the race! I was charity fundraising for the Canadian National Institute for the Blind, and that was my shtick. Based on previous races, it seemed like an achievable goal, as there really was not a lot of Canadians in the race historically. But on this day I was the second fastest Canadian. A former Olympic qualifier out of Quebec showed up and ran something like 32 minutes. How am I supposed to compete against that?! Even stranger - it turns out the guy takes martial arts classes with my uncle in Montreal!

Those are my two true runcations. We love going to Vancouver Island, and will time it around races, be it in Victoria, Comox, the Gulf Islands, and, hopefully soon again, Tofino. And Vancouver, too, is an easy getaway, of course, and always special when my nephews are at the finish line. I've also raced in Ottawa while there working for the Canadian Museum of History.

Where will we run next? You never know. 2018 looks like we will stay in BC, returning to the Island a couple of times  One day I would love to run in Haida Gwaii, and just across the border in my beloved Jasper. Dare I attempt the Mount Robson run, a trail that I've already hiked? The Sunshine Coast has a fun looking half, too

Iceland would be a dream trip, though I think that one is a ways off. Montreal is more likely sooner rather than later. Hawaii maybe? We frequent Arizona annually now, but it's hard to find races there in February it seems. New York sounds like a great idea! Let's dream real big - how about the Great Wall of China marathon?!

I'm certainly open to options. If you have any good ideas, you should tell Charmaine. She hates hearing me talking about running and especially my heart rate, but she enjoys being at the finish lines. And that's my favorite part of the destination race. That and the celebratory lunch with her after the race!
at April 03, 2018