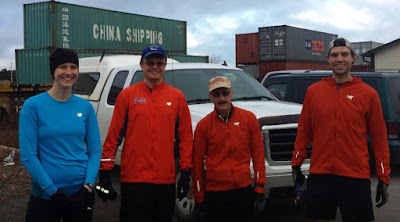 In November of 2016 we restarted Skeena Valley Runners. Brent, Stacey and myself posted a group run on a cold, wintery day. We only knew our friend Derek would show up. We were ecstatic when Nina was there before all of us. Someone came! I can't quite recall, but I think there was one other to show up that day - Eva perhaps? Skeena Valley Runners was reborn.

We kept doing this throughout the winter. We had people come and go, and I'm not going to mention everyone. But by New Year's we had quite the nucleus of high end runners to begin training with.

- This crazy Irishman named Peter who amazed us with his speed.
- The big Brit James, who was truly at home in the BC mountains, either on foot or on his bike.
- The enthusiastic Adam, who had crazy distance goals even if it meant running on a treadmill for hours at a time. 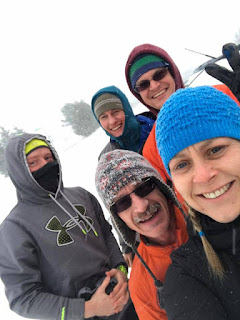 Colin would travel from Kitimat a few times. He was still discovering just how good he was and his growth in the sport has been insanely impressive. The guy is on a whole other level.

And Adrienne, who might not be able to beat Colin in a head to head race, but I think is the real phenom of the group. Her reluctance to wear orange is the only thing holding her back.

It made for a fantastic environment to train in. There was a lot of enthusiasm and ability in this group. It gave me extra drive to chase bigger goals.

I was going to join Brent in Boston.

My attempt would come in early May at the BMO Marathon in Vancouver. With only one marathon under my belt, it was a big ask. And breaking a 3:12 time limit was also big. But I was going for it!

But it was also a dangerous environment for me. I am - or maybe I was, I'm no longer certain that I still am - a competitive guy. To accomplish these big goals I was determined to be the best of a group of runners who were all better than me. That was my first mistake.

In the first three months of 2017 I ran 324 kms in January, 318 kms in the short month of February and a whopping 366 kms in March. On top of that, I was throwing in way too much speed work, as I wanted to defend my win at the Rupert Half Marathon. That was a huge mistake as I should have been running much more aerobically. That is actually what real runners do.

Beyond that, I was getting little rest. Rest is such a key variable to success in running. That is what real runners do. But I was up at 4am to work at the store. I would come home after lunch and work anywhere from 4-8 hours a day for the Canadian Museum of History on a big hockey exhibit project. And I was spending a lot of time preparing for my dream hockey project for the National Hockey League - a job that never came to fruition.

Also in hindsight, it was no shock what would happen to me at the Rupert Half Marathon.

I had a good first half of the race, and then started slowing down. By the 13km mark I "laid a wreath," as I say. Something was so wrong. I was running a full minute per km slower than I should have been and was just stunned as to what was happening to me. The pack pulled away and I was getting caught from behind. I struggled to understand what was going on. I was, literally, dazed and confused.

The only conclusion was I wasn't working hard enough in my training, when in actuality I was working too hard and sabotaging myself. So for the next two weeks I upped the mileage and the speed. 90 km and then 104 km. Huge mistake. I began failing to finish my runs completely. I remember three runs where I had to walk home. One was a full 6km walk in the cold rain.

Just a couple weeks ahead of the marathon I had come to the realization that I had overtrained.

Overtraining is an actual medical term. Trust me, I became VERY familiar with anything and everything about the subject. Remember, I am a researcher and in my struggle to understand I read everything available and exploited so many resources to learn about it over the next many weeks. I am an expert on the subject.

Overtraining is frustrating in that it is not a physical injury. Nothing hurts. It is a physiological injury. I had literally stressed my nervous system. Between the extreme exercise, the long work days and the lack of sleep, my body released so much cortisol into my system that my body was in a full fight or flight mode 24/7. When your body is that stressed you can not possibly perform your best athletically.

The marathon was out of the question. I downgraded to the Half Marathon, because I had already paid for the whole trip and wanted to salvage something. I ran it in 1:41, embarrassing for me but again the body wouldn't let me go any faster.

Then I had to stop. The only solution is rest. Rest until the nervous system is no longer stressed. There is no time line but everything suggested it could take as long as 24 months. I still had to work the zombie hours, so I told the competitive runners that I retired and they believed me.

I was able to adopt an active recovery game plan which allowed me to run but by not exceeding a strict heart rate. I would be able to get 200-250 km in each month, mostly in isolation, starting in June. With the hockey projects done I found myself with a lot more time so I relished the challenge of finding a better way to train, even though it started out incredibly slowly.

Physically and physiologically I recovered from overtraining, but I don't know if I ever did mentally. By September I pulled off a 1:36 half marathon on an incredibly hot and humid day in Ottawa - it was nearly 38 degrees with the humidity factored in. And then on an incredibly rainy October day in Vancouver I was able to complete a 10km in the very happy time of 40:04.

I have not raced since. And I don't think I have ever fully returned to my 2016 level. It continues to frustrate me as I try to find the right balance.

Not only was I not able to go to Boston with Brent, but I was also unable to train with him for the big race for the most part. Thankfully through Skeena Valley Runners we found new runners to help him reach the next level.

By spring of 2018 I was finally coming around to the point where I felt I could run with Brent and Adrienne in particular and not impede their training. Unfortunately this came just as they reached their taper.

But I'm almost there. I'm back and ready to be awesome. And I want you to join me. Join Brent and Adrienne and Skeena Valley Runners! We run this town and we're going to redefine awesome! We want you to dream big and reach the next level.