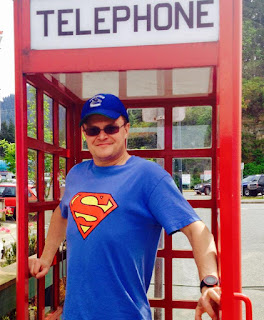 With those two words I began running back in 2011.

My buddy Richard Kriegl of Bert's Deli fame came into Safeway one morning, buying his breads and produce. It was like 7:30am and he was sweating, disheveled, happy.

"What the heck happened to you?" I mocked him, fully knowing the answer.

"I just ran 19km!" he proudly proclaimed, and well he should have.

Amazed, I honestly replied, "I wish I could do that."

He paused for a second, making sure to make eye contact, and matter-of-factly said, "You can."

It is a message that hopefully we all hear time and time again in our lives, and more importantly that we are passing on to our kids. Too often we don't truly hear it, though. Or don't believe it. It is a great failing of adulthood.

But for some unknown reason on this particular spring morning, the message really hit me.

Shortly after work, I went for a run. In a cotton shirt and cargo shorts. I wore the same dirty pair of cargo shorts for the first eight months or more that I ran. I must have looked like an idiot.

I drove to Christie Park to run the Howe Creek trail.  I practically lived at the opposite trail head, but I didn't want anyone seeing what I was doing. And it's a good thing I did that, too. I sprinted as hard as I could - I believed that's what real runners did: run as hard as you can at all times - and died 200m down the trail. Huffing and puffing I staggered back to the car.

That's how it all began. All because of two words. "You can."

I just wish Richard had told me not to do it in cargo shorts. 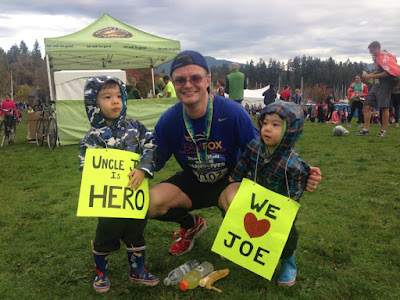 Over the course of this week I will share with you my running story, what I've learned and how to be awesome! Because you can, too.
at April 01, 2018