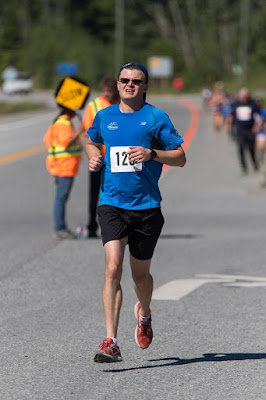 "Your husband is the guy who runs all the time, right?"

Charmaine gets this all the time.

"I see him running everywhere. He sure runs a lot."

It used to be I was Joe the Safeway guy. The first 8 years I worked there I was really front and center with the public. Everyone knew me. I pretended to know everyone in return, though I'm terrible with names. In the past 16 years I got away from that thanks to the zombie hours. There's not too many people to greet in the middle of the night.

Some people in town - not many but some - know me as the hockey writer and researcher. I've had some pretty neat projects over the years - working for the NHL, Sportsnet, Canadian Museum of History and too many more to mention. I even worked on Gretzky's book, and put out three books of my own. But I really don't talk about hockey too much locally. Other than my trademark Canucks hat I always run in, it's not well known in this town what I'm up to on that front.

But now most people in town think of me as that guy who runs a lot. Like they tell Charmaine, I'm seen running everywhere.

I do that on purpose. I want to be seen. When I first started out I hid on the Howe Creek Trail so no one could see me. I wasn't a real runner, I told myself. I did not want anyone seeing how bad I was. I am 100% certain that every runner can relate.

That all changed at my first Salmon Run at Kitsumkalum.

I had never intended to race. I wasn't good enough to race. There's more of that negative self talk again. We all suffer from it, but more often than not I like to think my days of that are gone.

Richard convinced me to try the Salmon Run. "Just do the 5k," he said. No way. He was doing the 10k. The real runners ran 10k. I would too. I was determined to become a real runner. I even spent an entire weekend at the library reading every page of every Runner's World magazine available. Okay real runners don't necessarily do that. Remember, I am a researcher.

I showed up at Kitsumkalum in my trademark cargo shorts. The crowd was large, but I knew nobody. I hid in the back of the gym as everyone nervously signed in and chatted with other runners. Everyone seemed to know everyone. I truly felt like I didn't belong. Now if you've been to any Skeena Valley Runners events recently, you can't possibly imagine me like that, I hope. But those days aren't so far behind me. I remember them well.

I don't recall too much about the race itself. I know it was hot. Very hot. And the dirt roads were quite dusty. I sped off way too fast at the start and faded by the end, like most runners, new and old. Even real runners.

I never had a time goal for that race, mostly because I had no idea what would be a good time goal to have. I wanted to be within eye shot of Richard when he finished, but that idea quickly vanished. I finished in 47 minutes. That is the slowest 10k race I have ever done. But at the time I was amazed!

Richard insisted I stick around for the ceremonies afterward. I did not want to. I still knew nobody, and being all hot and sweaty did not make that any more enjoyable. Sitting at Richard's table did not make it any easier, because Richard knows everyone! I just kinda sat there. I enjoyed the salmon feast, but otherwise I really wanted to leave. It was like high school all over again!

I never intended on sticking around for the medals because runners like me don't win medals, I thought. Turns out Richard knew something I did not. I won a medal. Third place in the 20-39 age group. I couldn't believe it.

I've come a long ways since then. 47 minute 10k races are now 40 minutes, even though I'm in the older age group now. Medals? I have never not won an age group medal at a local event yet, as it turns out. I have accumulated a few dozen medals over the years. I even won two races - The Cannery 10km and the Rupert Half!

And it all started on that June day at the Salmon Run. It was the day I became a so-called "real runner."

I even went out and bought proper running shorts. I spent $7 on Walmart shorts! I still have them actually, but I rarely wear them. But the key thing is they were not cargo shorts. Real runners don't run in cargo shorts.

I quickly found out real runners don't run in $7 Walmart shorts either. But it was not nearly as noticeable. Especially since I was becoming faster and faster. Maybe another racer would notice my $7 Walmart shorts, but it would only be for a second or two. I had no intentions on hanging around very long.
at April 02, 2018