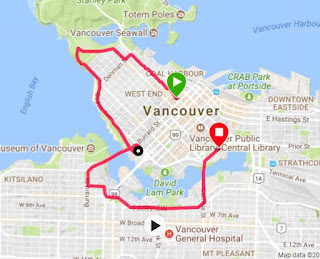 On Sunday I raced the 2018 Vancouver Sun Run. After much concern over my injured hamstring and lost workouts, I was able to finish in a time of 41:26. That is my third fastest 10k race officially, though I have done faster in half marathon training at least twice.

My placing was 555th overall out of somewhere around 45,000 runners. I don't usually pay much attention to my overall placing, but I am always happy to finish first from Terrace, first among all Pelletiers, and first among all competitors by the name Joe, Joey, Joseph or Josef.

41:26 isn't quite the time I had originally hoped for, but I am happy with it. I had hoped to break the 40 minute mark, but ever since losing a week of key workouts to the hamstring injury I knew that was out the window. To be honest, I don't know if I was really that ready even before the injury. (The injury was mostly non-factor today, thanks to an extensive warmup routine before I hit the SkyTrain to get down to the event. I felt it a bit in the 2nd KM but not all day since.)

Deep down I knew today's best hope would be a 4:10 overall pace. I did 4:08. Funny how 8 seconds adds up to a minute and a half over your original goal.

I felt strong at 4:08, but I don't think I could have gone much faster. But what is encouraging is I felt I could have kept going well beyond 10k at that pace. Maybe not 21.1 KM yet, but longer. My breathing was great, though my heart rate was puzzling high today - off the scales high. I think there must have been something up with my heart rate monitor.

Here's a look at my splits: 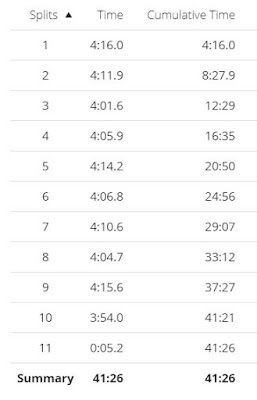 My game plan heading into the race was to try a 4:10 opening KM, followed by getting down to 4:05 through to the 9th KM. At that point I'd hope to open it up even more, giving whatever I had left.

Congestion was a real problem through the first 2 KM of the race, which can be expected. It's quite annoying to have walkers and slower runners start way out of position. It's dangerous too. If you're in a race driving a Chevette, don't start in front of the Corvettes please! Race organizers should be much stricter in making sure the right coloured bibs enter the right coloured corrals, but they aren't. It's a fact of life in these big races, making it hard to hit new personal records.

After the opening 2 KM I felt I did a pretty good job of getting on to my pacing game plan. The 5th KM featured the only hill on the race, the steep entrance onto the Burrard Bridge. Hence the slight falling off of pace there. As always I just get through the hill and not worry about pacing so much there.

The 9th KM was a little disappointing at 4:15, but the 10th KM was strong under 4:00 pace. Losing a couple of long runs to the hamstring injury may have played a role there.

All in all, there's not too much on this race where I could have gained. Maybe best case scenario with less congestion and a better start (you have to be in your corral an hour early which does not allow a great warm up. If you don't you get in early you will be even further back in the congested throng of people) I could have saved 30 seconds today.

I enjoyed my Sun Run experience, my second race here. But I found the race expo very disappointing. And seriously folks, no finisher medal?!

I was disappointed in my mental execution during the race. I was unable to really get my mental "daydream" on of local racers and family cheering me on. I was never close to finding flow, or being in the zone as they say.  I had spent a bunch of time in the past week focusing on such mental tactics, but there is definite opportunity to improve here. I do feel I was able to stay in the moment and had gratitude for the race on this beautiful day throughout, however.

Under the injury circumstances I would have been immediately pleased to be under 41 minutes. It took me a few minutes to realize 41:26 was a very good time and I had an excellent day afterward.

I had said previously this race would a) define where I'm at and b) be judged by the process more than the clock at the finish line. I think it has told me I definitely have some work to do to get to where I want to be. It also has told me where I need to improve on the process itself so that I can get there.

Congratulations to all the northwest runners who travelled to Vancouver and enjoyed the Sun Run, most notably Chris Pendray of Smithers who finished in a ridiculous time of 33 minutes. That is truly amazing!

Here's the other times from Terrace runners (click to enlarge): 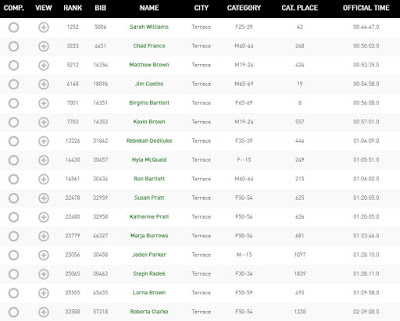