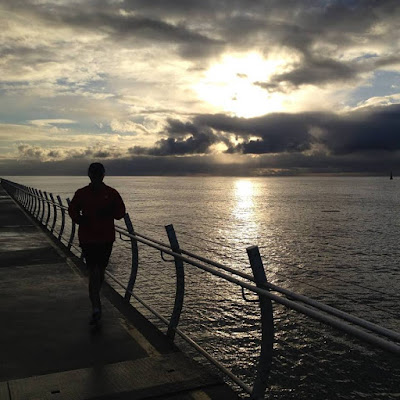 I am off to Vancouver Island for one week of fun. Vancouver Island has replaced Jasper as my favorite getaway, but only by a bit. We get there a couple of times a year. The picture above is me running on Ogden Point - Charmaine's favorite picture of me.

This trip came up as a bit of a surprise. It is for Charmaine's work as she has a bunch of meetings down there. I'm going to tag along and stay in her company-paid overpriced luxury hotel and just hang out in the bookstores and parks of Victoria. We will also travel to Courtenay to see her aunt and Qualicum for a night's stay on the beach. Life. Is. Tough.

The very first day I have decided to enter a 10km race. It is the Oak Bay Half race, though I'm only doing the 10km race. One week ahead of the Rupert to Terrace Skeena River Relay, I decided racing the half is a bad idea. I really hummed and hawed about just running it as a training run though, time be damned because the course is so beautiful. The half is run along the ocean and through a golf course. What a great setting.

The 10k is run through the residential streets. Now Oak Bay is one of BC's most posh neighborhoods, but I won't get to see much of the ocean on the 10k course. But that's okay. I will get a chance to truly race this way, and hopefully am recovered a week later for the relay.

The 10k is a pretty small event, at least by big city standards. I'm expecting about 500 competitors. Based on historical results a 37 minute time will win this race. That won't be me, but if I have a good day I think I can crack the top 20. And I think I can place top three in the masters category.

It will be interesting to see how much progress I've made since the Sun Run which was just three weeks ago. That is not a lot of time, so improving upon my 41:26 isn't too likely. My biggest mistake is probably not doing enough speedwork in the last three weeks.

Regardless what the final time says, I feel much stronger than the Sun Run. My hamstring is still acting up but it's quite a bit better so that should immediately help. I have been doing A LOT of trail running which not only has made my legs feel noticeably stronger but has really strengthened my love of running. I have not felt this good about running since 2016. I also have been training quite a bit with Brent and Adrienne, the pros as I call them, and, for the first time in more than a year feel like I'm on the verge of being the runner I'm capable of.

In short, I'm in a really good spot right now. This race is a bonus race, just for fun I tell myself. But I am putting a little more focus on this race than the relay to be honest. My Texada Island race in August is the real goal race. This Victoria race is just another test to see where I'm at.