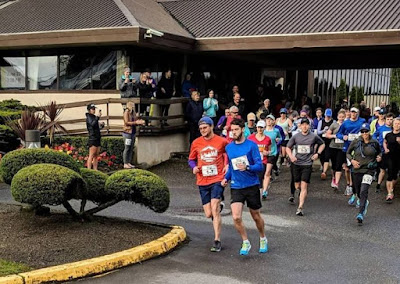 This may surprise people, but Saturday was the first time I have ever competed in the Skeena River Relay.

The Skeena River Relay is the grand-daddy of running events in the north, as 30 teams of 10 runners race 142 kilometers from Prince Rupert to Terrace.

And happily so. What a great group of inspiring people. Yes, Adrienne and Brent and ultra-man James were there, but we had such inspiring stories with every runner. Adam and Sheldon coming off of injuries to push their running journey forward. Sarah and Karin giving it everything they had. James and Steph, undoubtedly in a hurry to get home to their newborn. And the kid Owen Block, pinch-hitting for us last second and nearly win his leg outright.

I chose the very first leg, which meant a 7am start and hotel room overnight. Problem was when I agreed to that I did not know I would spend the previous week touring around Vancouver Island. By the time I got into Terrace and drove to Rupert it was nearly 11pm. Alarm was set for 5am.

Add in the fact that I had raced only a week before and my overnight heart rate was sky high for unknown reasons, and I guess it should have been obvious I was going to struggle a little bit in this hilly race. I placed third, not so far behind my buddy Derek and quite a bit ahead of everyone else. I was just under 59 minutes.

My dream goal was to beat Derek, but the guy is a machine right now. My real goal was to hit 58 minutes, but I just never found the rhythm to do that on this run. My heart rate and breathing were really strong, but my legs (or should I say brain) just didn't have enough juice to push much harder. I did hit my spoken goal of being under 60 minutes, but I was a little bit disappointed.

That changed when I got home and was looking at historical times of this opening leg. In the previous six years only eight runners bettered the 60 minute mark. I feel I joined some pretty good company on this day.

While I did get to see my teammates at the finish line, I really did not get to taste much of the true relay excitement at the various exchange points. Instead I had a wonderful day with my daughter Kylie in Rupert. Fish and chips and exploring the town are always fun things to do in Rupert.