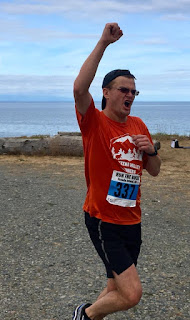 The goal had always been the same since late 2017 when we decided we were going to spend the end of August vacationing on the little-known British Columbia gem known as Texada Island.

I wanted to WIN the half marathon there.

Not just the masters' division. The whole race, young punks included. No time goals. Just the audacious goal of winning - a goal I never actually set even though I previously have won two races outright in the past.

Rob MacWilliam and his fantastic gang of locals put on a tremendous though small event. And to say it is a challenging course is an understatement. With pot-holed back roads and huge inclines, especially early in the course, this is not the easiest race around. Not even close.

I trained very hard all summer, with lots of trail and road ascents, and an average of 75km of running a week. Beyond that I did what I do best - gained advantages through research. I knew every nook and cranny of the course, studied every recorded Strava run on it and, quite seriously, stalked my competition. I knew ahead of time who the competition were, and what they were capable of.

That being said, I was full of self doubt until I got to the island and could actually see the course for myself a full day before the race. That is when I knew I was ready. The course had me freaked out for weeks all summer. Hills are not my specialty. Trail running - which is essentially what large segments of the course are - is not my specialty. Based on the intel I gathered about my competitors, I knew I was in the hunt for the win. But it took until just hours until race day before I knew that I would conquer the course first and foremost. 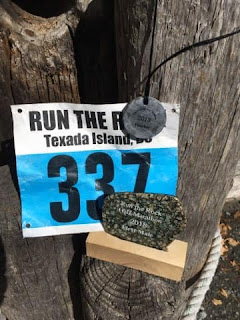 Conquer it I did. I raced a 1:32, a full five minutes ahead of the second place finisher. I had never really set a time goal for this course, though I had told myself if I could get 1:35 with all the hills, I would be happy. Needless to say I'm quite thrilled with a 1:32. My PR is 1:30 and I think had today been on a flat course, I could have broken that.

My original strategy was to race this tactically. My usual race pattern is to quickly fall into my rhythm and desired pace and just go with it. This time I had every intention of sticking with the lead pack - and with one runner in particular - until we got through the worst of the hills. Then I would make a decision as to when to try to break from this small pack and gun it home.

It was a sound strategy, but I failed to follow it. Thankfully.

From the start I headed out with this guy from New West who I thought was going to be my main competition. We were doing 4:25/km pace or so, but on the very first hill maybe 500m into the race he dropped back and disappeared.

The first km is actually a loop of the village of Van Anda, and we were going back past the school where we started. With Charmaine and the crowd down the hill I decided to race in and, much to Charmaine's amazement, I had obviously already dropped the plan and was running how I run best. Gunning it.

The cheer of the crowd was nice. But I noticed something interesting. Before the next cheer erupted to welcome the next runners I had already moved on quite a nice distance.

I continued to gun it for the next couple of km before the course veered off the pavement and onto the rough uphill roads. I would completely follow my strategy here - run by effort. Keep the breathing under control and just do what you have to do to get the job done.

Before I left the road for the trails I took a quick look back. I did not see my expected competition anywhere. I only saw one fellow back there, and probably 500m back. I had done my homework on him and didn't think he was a threat. He would run the best race of his life though, setting a new PR on a very tough course. He is an up and coming runner for sure.

The off road section continued on past the 7th km, and I was able to "do what I had to do" with time splits that shocked me. I was flying.

More importantly. I was fully in flow.

Flow is something I've been working very hard to understand and cultivate in my running and other aspects of my life. By being fully in the now and giving full concentration to the task, you are able to enter this almost super-human state where everything seems to be just easy. Pro athletes call it being in the zone. Everyone from writers to piano players can experience it. You are so fully immersed in what you are doing you lose sense of time and space. It is this natural high that is very addictive.

I have studied this phenomenon that comes to me with all my best races. And I worked hard to set all the conditions for it occur on race days. So I was ecstatic when I entered it so quickly on this race. At that point I knew I would accomplish the goal at hand.

In fact, I was so immersed that I did not even notice a gory scene on the course that was the talk of many of the runners at the finish line. A poor deer must have been hit by a car, and his carcass was on the side of the road. Half a dozen vultures - I don't think I've ever seen vultures before - were feasting upon it. I ran right by and never saw a thing.

By the time Charmaine drove past me on the highway I was already past the half way point. She thought something had gone wrong because she was shocked to see me so far ahead of the others. She feared I hurt myself on the trail until she found me.

It's a good thing she did find me at that point because it was not much longer before I had to once again veer off the pavement and through some gravel roads before returning to the pavement. It was at that turnoff there that I seemed to especially shock the volunteers. None of them seemed ready or expecting me. It was kind of a neat feeling.

When I returned to the roads I knew my reward was waiting. There was about a 3km stretch of paved downhill where I was just going to pound it had my expected competition still had been with me. I really tried never to look back and see how far they were behind. But I could tell from the lack of cheering at the many aid stations that no one was near.

So I flew down the hills into Gillies Bay at a controlled 4:00/km pace, thinking I would at least hold that lead. I wanted save something for the final 5km of the race just in case the competition showed up. The guy from New West is an avid cyclist and I knew he'd have a huge aerobic base and I suspected he finished strong. Twice I looked back on the longer straight stretches, but I was all alone.

Much of the run through Gillies Bay to the finish at Shelter Point park is a 3km incline that would have to be described as deceptively tough. I slowed here a bit, partly because I knew there was no push from behind. I fell out of flow at this late stage and was just getting through the hill until the nice downhill spring into the spectacular Shelter Point park.

I was the first runner to arrive - a marathon and 8km race was also being raced at the same time with all runners ending at the same spot, but I beat them all to the finish. I raised my fist in victory as I could see the photographer straight ahead of me. I had accomplished my goal.

I wanted this accomplishment partly to re-assert my return to form after overtraining in 2017. But as 2018 went on I wanted this accomplishment also as a form of validation. So many other top runners I know pay a lot of money for professional coaching and the results are impressive. While I relied heavily on advice from other Skeena Valley Runners - namely Sheldon, Derek, Adrienne and Brent - I accomplished this goal uncoached and on my own. I know I know my running ability better than if I was coached by an out-of-towner.

I also know the coaches are not teaching the secret to ultimate running performance: flow. And it is so very addictive that I can't wait to run again.

Email ThisBlogThis!Share to TwitterShare to FacebookShare to Pinterest
Labels: Flow, Run The Rock