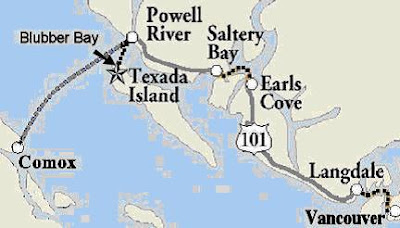 So I have been quiet for several weeks.

Part of me has been very busy with organizing King of the Mountain. It is such a big undertaking, especially the seeking of sponsorships, and it can leave you exhausted before you can focus on your own running, coupled with the fact that I get up at 4am for work.

King of the Mountain deserves it's own post, but I'm low on time. There was so many great stories - from my buddy Derek winning to the inspirational story of Kurt Schlegel. Kurt shows up at every race. he is usually the oldest one there and generally finishes last. But he loves everything about racing. He took a bad fall on the mountain this weekend, and became dehydrated as well. But he persevered and refused to stop. He came to the finish and he, too, was a King of the Mountain every bit as much as Derek.

Part of me has been busy training away for the Texada Island Run The Rock Half Marathon. It's just days away now. August 26th.

In theory, I should be able to do really well at this race. There's only 51 racers as of this writing. I've tried scouting them out where possible, be it on Strava or various race results websites. Yes, I'm that kind of guy. And I should be in the hunt.

I've put in big weeks, average 75km a week for the last 7km. Texada is very hilly, and uses abandoned mining roads largely.  So I focused on vertical gain. I've averaged over 1200m of vertical gain each week, and tried to use gravel or trail where possible. That is by far the most vert I've done. I hate hills.

Where I went wrong was on the vert. I just accumulated large totals of running uphill at a steady and aerobic pace. I falsely believed the running uphill is like speedwork in disguise. I didn't focus nearly enough on speedwork at all this summer, partly because it has been so very hot. And partly because speed is my game. I always trust it to be there when I need it. But now come race day, I seemed to have lost it.

You don't really lose speed. But if you train poorly and that will slow you down. And ultimately that is what I have done. My legs seem dead at times. I did great on the aerobic end of things, the 80% in the 80/20 running theory. But I didn't do well at all in the 20% where the speedwork pays off. 80/20 only works well if a) you honour the 80% easy running but also b) nail the 20% hard running.

There were other areas to improve my training too, of course. The heat never helped. And, and this is a biggie, I had trouble finding the right training partner for most of my runs. Life schedules are like that.

So I go to Texada Island in a poor place mentally for the race. I have a game plan, but I don't know if I can sustain it. It might be a very long run where I will be forced to salvage other wins other than time or place. Throw in variables such as the hills (and I'm not a good hill racer) and the air quality (bad forest fires from Vancouver Island have residents faced with daily warnings about the smoke), and this is a wildly unpredictable event. Of course, everyone else faces the same variables.

Today I should have done a 2 hour long run with a fast finish to gain confidence for this race. Normally at this point I can do that with ease and know I'm ready to roar. Today I decided to screw it. I went up Steinhoe Trail and just ran aerobically. And I loved it. It was one of my favorite runs, and I haven't had a lot of really enjoyable runs this summer. I truly enjoyed this one.

So while I have Texada upon me, and the Cannery and Victoria soon after, there is a big part of me that is returning to that realization we have talked about before - that finishing time and place is irrelevant. Those are not the goals to be chased even on race day. There are more important things to achieve with every run. Everyone knows that a runner who is enjoying the run is the most dangerous runner in the race.

And with that proper mindset I will prove to myself if no one else that I am the kick-ass runner that I want to be.
at August 12, 2018