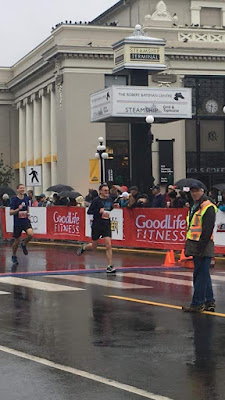 I managed to gut out a 1:32 half marathon in Victoria on Thanksgiving. That was not the sub-1:30 race I had been hoping for, but it was a good race and a great day. It is the end of a great running season for me.

And that, on this Thanksgiving weekend, is one of many things I have to be grateful for.

There's a bunch of excuses I could list as to why sub-1:30 didn't happen, but that's silly.  Although finishing well ahead of the 1:30 pacer was annoying. I knew I was struggling a bit so I just zoned out for the final third of the course. I kept telling myself don't panic, as long as you don't see the pacer you're good. I never did, but I know he never passed me. By the time I went for the final 1600m push it was too late. The goal was out of reach.

The real reason is I did not achieve the goal today was I did not flow.

I wrote in the past about the mental zone one can enter when totally in the now, concentrating and achieving the goal at hand. It makes everything so much easier. But it is elusive and never guaranteed. And it did not happen today.

The worse was the plantar fasciitis flare up half way through the race. Without flow I had to fight through every step, each of which hurt. It still hurts, but with the racing season now over I can hopefully let it heal up.

Though today's goal was not meant, bigger goals were.

First and foremost, this capped off a very successful comeback season for me. I have said for several weeks now I feel like I am on the verge of a breakthrough, though I also said it wasn't likely to happen until next year. I need another training cycle, and to somehow figure out how to maintain what I've gained through winter.

Another goal of mine is to always be a consistent 40 minute 10km racer and 1:30 half marathoner going through to my 50s. That consistency is, in my mind, a very admirable goal to have. And it allows you to always be open to the possibility that any given day might be THE day where a breakthrough happens.

It was a great day for Skeena Valley Runners, with many others achieving inspiring results today. Everyone I have talked to, mostly in Victoria but also at other races, had fantastic days.

And that, on Thanksgiving, is what we should always achieve. Something to be grateful for. Something to find inspiration from. Somehow inspire others. Because today might be the day.