The Importance of Play 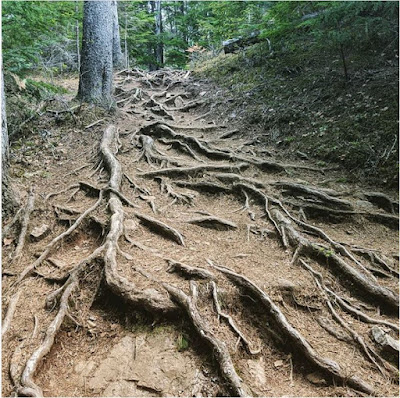 As a kid I grew up on Terrace Mountain. Literally.

We rode our bikes, played GI Joes, tag and hide and seek and built forts, the remains of which can still be spotted. It was the best days of childhood because our play was full of exploration and nature. We knew that mountain better than anything else.

In the last month or so I have been reliving my childhood. I have done 10 runs, exploring 12 trails including several decommissioned trails many people don't even know about anymore. I have totalled 82.5 kilometers, 3934 metres of elevation gain and over 12 hours of running/power hiking, all on Terrace Mountain (no crossing the road to the adjoining Steinhoe trails!)

It is the healthiest mid life crisis a man has ever had. Both physically and mentally.

I am not a good trail runner, but I have not had this much fun running in such a long time. And the reason is because, just like when I was a kid, this is all play.

I've told my story before. Up until 2016 I ran for all the right reasons - fun, health, social connection, personal growth - and got quite good at it. 40 minute 10k, 90 minute half marathon. I wanted to help others achieve what I had, and with the help of Brent and Adrienne and others, Skeena Valley Runners was reborn.

The problem became we attracted some very high end runners right off the bat, and I began running for the wrong reasons. I got competitive, and wanted to beat them all. I badly overtrained in the process and spent the entire year recovering. In 2018 I spent the entire year returning to form, performing spectacularly well at races in Oak Bay and Texada Island, but I was still running for the wrong reasons. I was running to be competitive. And, even if I did not fully know it at the time, I was not having a lot of fun.

Call it the love/hate relationship with running. But I was spending a lot of time working at training plans, working at drills, working at specific runs. Working.

But in 2019 I have nothing really to work toward. I have no goal races due to travel opportunities. I have no pressure to perform. I have no goals to meet. It is the most freeing experience and the best thing that has ever happened to my running

I have a very happy dog who I take running with me on the trails from time to time. The entire time he is at play, happy in motion and in nature, fully engaged in exploration and curiosity. He is fully in the now.